Top 10 Movies what plays with your MIND


Are you bored watching romantic movies with your boyfriend?

I guess not :D But now is your boyfriend time to choose a movie.
Here is a list of movies what is full of action and what will blow your mind. 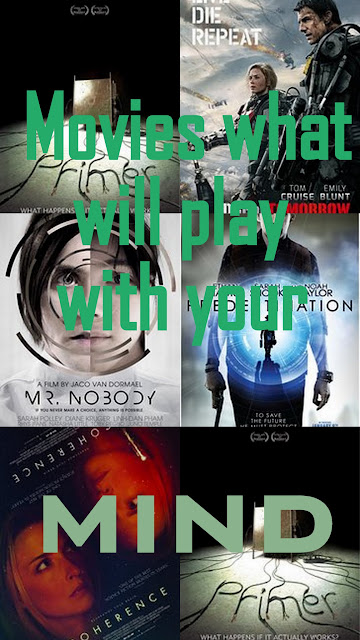 What I like about these movies that these endings are very interesting, you will not expect that coming. So crab your popcorn, snacks and drinks and snuggle with your boyfriend. You will need him now more than ever. :)

10 - Mr. Nobody = A boy stands on a station platform as a train is about to leave. Should he go with his mother or stay with his father? Infinite possibilities arise from this decision. As long as he doesn't choose, anything is possible.

9 -  Triangle = This is not very popular but it's full of action and guessing. Psychological  horror thriller movie. I think it is really  underrated movie. It's mysterious and also sad.

8 - Interstellar  = It will make you cry :) , long movie but worth watching. It's science fiction movie. A team of explorers travel through a wormhole in space in an attempt to ensure humanity's survival.

6 -  Inception =  Also Leonardo DiCaprio is playing :) A thief, who steals corporate secrets through use of dream-sharing technology, is given the inverse task of planting an idea into the mind of a CEO

4 - Shutter Island = Leonardo DiCaprio is there.. ;)   Psychological thriller film . In 1954, a U.S. marshal investigates the disappearance of a murderess who escaped from a hospital for the criminally insane.

3 - Edge of Tomorrow = A soldier fighting aliens. I know it's not very much info but i don't want to spoil it.

2 - Predestination - You have to watch it very carefully because its hard to understand. But it's really cool movie. For his final assignment, a top temporal agent must pursue the one criminal that has eluded him throughout time. The chase turns into a unique, surprising and mind-bending exploration of love, fate, identity and time travel taboos.


1 - Coherence = It was really low budget movie, but it was so cool. One of my favorite. Strange things begin to happen when a group of friends gather for a dinner party on an evening when a comet is passing overhead.

If you like more info then you can always watch trailer but i don't recommend it because then you will spoil it for yourself :)